U20 Championship - Review of the Round

The U20 Championships kicked off on Sunday with four games taking place in Coimbra, Portugal with the quarter finals of the competition.

Spain produced a solid performance first up in this year’s Championship, although this wasn’t just a one-sided affair, Germany fought and pressured Los Leones, who had to go up the gears, particularly in the second half, to confirm their place in the semi-final. The main difference between contestants can be almost put down to one detail: the forward pack.

The Spanish U20 national side overpowered and bullied the opposition from start to finish, commandeering the maul and scrum that opened the way for at least five of the seven tries, with captain and hooker Gonzalo Gonzalez, lock Hector Matamoros, and open-side flanker Álvaro Rodriguez in the spotlight for their leadership, work-rate and wisdom, digging up a substantial gap between their side and the Schwarze Adler.

Spain’s capability to dominate in the set-piece (only one lineout lost, and four scrum penalties won), granted them territory and possession, patiently working their way to the try-line, making a decisive incision each time they mounted a maul inside their adversary’s 22-meter area.

Although Germany lost, in the end by 18-47, at the beginning of the second half they were close to a comeback after a spectacular try that closed the gap to four points, never fearing how Spain would answer back. Number-eight Chris Umeh deserves a spot as one of the 1sts round best players, as he completed more than 100 meters, two line-breaks, six defenders beaten, four tackle-busts, and twelve tackles (add one turnover also), bringing flair and belief to his side.

All things considered, Spain showed why they’re one of the top contenders of this year’s U20’s Rugby Europe Championship, leaving a resounding warning to every other national side: fear the Los Leones forward pack machine.

Man of the Match: Chris Umeh (Germany) – Germany’s Next Big Thing is here, breaking away strong attacking lines to his side, powering over the opposition with a combination of speed, physicality and handling awareness

THE DERBY: THE DUTCH SMILE AFTER THE LOW COUNTRIES CLASH

2021 have been a superb year for those who love a Low Countries Derby, a match that opposes Netherlands and Belgium, as after the senior’s National match and Super Cup’s duels between Delta and Brussels Devils, the U18’s supplied yet another exciting bout, won by the Dutch squad.

There was uncertainty until the last quarter of the match, as both sides were separated by one point, delivering small blows until we reached the 60th minute, the game’s-defining moment: high pressure by some Dutch players blocked a Belgian kick, with the ball finding its way to Kai Van Kampen hands … the fly-half accelerated, stepped and took two tacklers off, opening a big enough gap to Tim Jong, offloading the oval ball to the number-eight, who only needed to do a small sprint to reach the try-line.

The Belgians felt the hit and were never able to find themselves again as their neighbors started to feel comfortable enough to move the ball around, applying pressure by a strong kicking display, and looking to pounce on every turnover or counterattack won.

Flanker Jacques Genin or first five-eight Dorian Lucas tried to work in vain to stop Netherland’s momentum, but there wasn’t enough gas in the tank to find ways of getting back in the lead, and the Netherlands third try (an excellent breakaway from centre Daily Limmen) got them to the finishing line.

Wrapped up, and the Netherlands are through to the semifinals to face Spain, while the Belgians can still finish in the top-5 of the tournament.

Man of the Match: Kai van Kampen (Netherlands) - the fly-half created some of the best opportunities, thanks to his predisposition to step and run, making the Belgium setup uncomfortable;

🇳🇱 The dancing Dutch after defeating Belgium in the quarter finals of the U20 Championship in Coimbra.

THE GOLDEN POINT(S): RUSSIA AND A SENSATIONAL COMEBACK TO LIFE

80 minutes wasn’t enough to decide who would face Portugal in the semi final, as Romania and Russia forced each other to go to extra-time, with emotions pilling up until the decisive moments: a penalty kick. Yes, it was near and in front of the polls, but it still had to be converted.

Alas, for the Romanians, Maxime Feougier didn’t miss his mark and converted the last three points, qualifying Russia for a semifinal, keeping their title hopes still. Nonetheless, the final scoreboard showed a 29-26, there was a period of time that everyone thought it was a done deal for the Oaks, as they held a 13-point margin with just over half an hour to play. So, what happened? How could Russia turn the tables and go for a brilliant victory?

Belief, resilience, and guts to keep faith in their gameplan, that started to pan out when winger Maksim Shetsov made a linebreak in a spectacular fashion – a great team movement, one of the best in this opening round -, driving the Russians forward and towards the try-line, with that precious try coming from Nikita Arlashov hands. Romania were unable to withstand their long-time rival’s confidence, conceded space and penalties (a total of fourteen), and allowed uncertainty to enter in the fray, with the conceding try coming to life after another great set of phases by the U20’s Bears.

The ironic part is that Romania could’ve bagged the win if they tried a drop goal on the 80th minute mark, as they were camped in the opposition last five-meter line… unfortunately, for them, the call never came and the match went to the extra-time and gold point.

For Russia, their comeback is a lesson in how to never give up and lose focus, believing that is possible to achieve a goal even when everything seems bleak.

Man of the Match: Aleksandr Belosludtsev (Russia) – pace, speed, and quick-drawing passes, the scrum-half was integral for Russia’s comeback, making life hard to the Romania defense, while keeping his team tidy in their counter-maneuver strategy;

🇷🇴v🇷🇺 | It's a win for @RugbyRussia after slotting the 'golden point' in front of the sticks.

Great scenes at the end and well played to both teams after a fantastic game of rugby! pic.twitter.com/GhfgYEAOWm

THE TITLE HOLDERS: PORTUGAL AND A CHAMPIONS ENTRANCE

The U20 title holders faced a spirited Czechia side in the last match of the first round, a game perfectly played by the Portuguese, taking their status as champions seriously from the get-go. 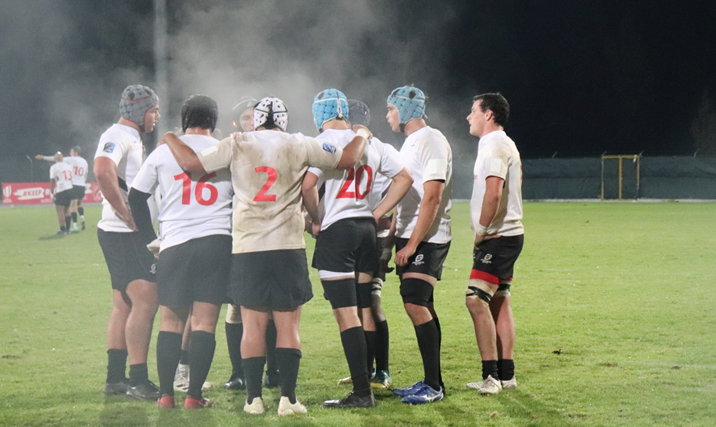 Nuno Aguiar’s men were unsatiable and unrelentless in every set-piece, keeping their foot to full throttle, scoring ten tries, a couple of them adorned with some stylistic handling tricks, in what was a powerful showing of the three-time U20’s champions. Czechia tried to support their defensive line, throwing a fair share of dominant tackles – number-eight Joseph Maybey was rock solid in the first 40 minutes - but were unable to hold their opposition when the pace skyrocketed.

There are two combos that you should take notice of: the centre pair duo, José Paiva dos Santos and João Vieira, who can’t stop going forward, making each run a sprint to the finishing line; and the 9-10 channel, António Campos and Domingos Cabral, both of whom were central to how Portugal controlled the flow of the match, building stable phases, controlling the pace and speed of their team.

The combination of these factors, and also the forward pack, made everything easy for Portugal to get their ticket to a semi-final that could open the way to the fourth consecutive tournament final, with Russia standing in the way of that goal. Will they reach it?

Man of the Match: João Vieira (Portugal) – irritating player for whom has to deal with him on the other side, the CDUL Rugby centre was unstoppable every time the oval ball reached him, making way for three line-breaks, four tackle-busts, and one try.

The next round of matches will take place on Wednesday with the full schedule available HERE and will be live on rugbyeurope.tv