U18 Championship Review - Round 2

What a second day for the Rugby Europe Championship U18, as we had the pleasure to see a Penalty Shootout for the first time in many years, as we look back at some of the action from round 2, as another four games took place in Georgia.

The hosts and Portugal will contest the 2021 final, but not before Spain and Belgium battle it out for the bronze.

Germany and Netherlands will also go up against each other for 5th place and Romania and Czechia will face off for 7th place.

GERMANY HOLDS IT TOGETHER ON THE ROAD TO HISTORY MAKING

The first game of the day was a tight affair, where we think a defining moment in the match
It game to life on the 35th minute-mark, just before half-time; Romania broke the line, thanks to a nice side-step by their nº10, Ioan-Stefan Cojocariu, and it seemed certain to score their second try of the game… but, Maximilian Schmitt, coming from nowhere, just outpaced the first five-eight and tackled him to the ground, offering flanker Jan Christiansen a perfect shot for a turnover at the breakdown, which he made.

The Romanian side, at that point, was in the lead by 3 points – 10-07 – and if they had managed to power themselves over the finish line, it could’ve well have ruined Germany’s hopes of reaching the 5th place final. 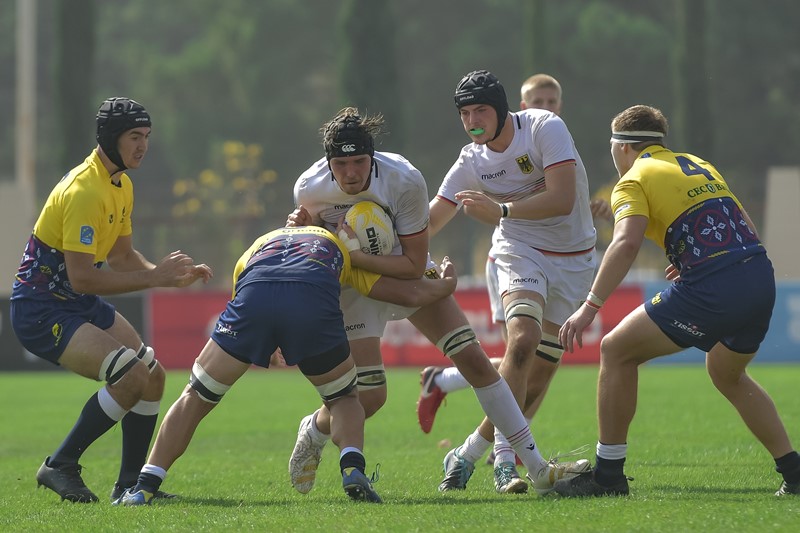 From that point on, the Deutsch team turned the game around and started to dominate, mounting an impressive comeback that materialised in the final 35 minutes.

Jan Christiansen, had an impressive game, finishing as king of the breakdown (3 turnovers), as well centre Aro Hama, and fly-half Christopher Hennig, who showed their best skills to help Germany get the win.

Star of the Match: Jan Christiansen (Germany) – thirteen tackles, three turnovers, and two forced penalties on the opposition, the flanker was just insatiable in his defensive duties

THE RECIPE TO WIN: A DUTCH ROLLING FORWARD PACK

Netherlands and Czechia were the next two teams in action, and it ended with an undisputed win by the Dutch side, who showed their class during a very physical game. After a solid showing first out against Belgium to register the win.

What marked the difference between both sides? The Dutch forward pack. The backs had their say, as they crossed the line twice, but it was the 8-man squad who pushed their team to victory powering and dominating in the scrum and lineout. 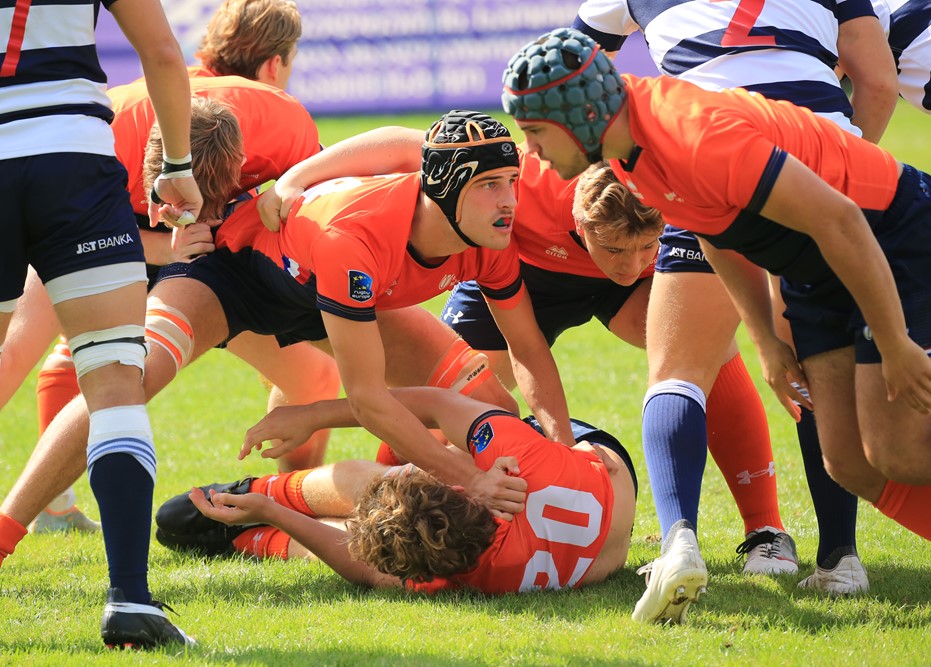 Maxim Guillorit, Netherlands starting hooker, gave muscle to the first row, and was a true threat at every set-piece, snatching two tries and a eye-catching performance.

Number-eight, Rembrandt Siebenga, and fullback, Daan Jazet, also caught our attention, thanks to a balanced physicality that dealt damage to the opposing side.

Star of the Match: Maxim Guillorit (Netherlands) – two tries and two turnovers, the hooker deserves all the praise as he was one of the best from start to finish.

PORTUGAL SURVIVES IN A PENALTY SHOOTOUT

We were treated to a thrilling encounter between two long-time rivals, that forced Portugal and Spain to go to a Penalty Shootout to decide who got the ticket for the Championship final, earned, in the end, by the Lobos U18.

It was a game where we were treated to many great moments with Portugal or Spain building excellent team movements, like in the first try of the game (the sheer brilliance of Guilherme Vasconcelos to send the ball sky-wards risky conditions…) or when Spain pulled back a 13-point deficit, to take the lead when there were only 8 minutes of play left. 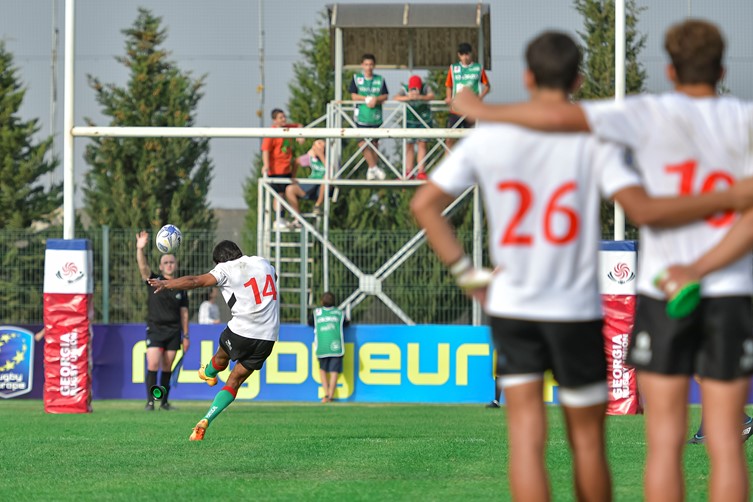 Beltran Ortega and Asier Pérez, for the Spanish side, cracked the defensive line seven times, and brought some of the biggest bangs of the match; Guilherme Vasconcelos and André Cunha, for Portugal, completed some of the best tackles or individual actions and were big players for their side.

When the 70-minute ticked, the match official doted the final whistle to the game and pointed towards the goalposts… it was time for a very-rare penalty shootout.

As hearts raced, and the kicks were taken, both teams were getting closer and closer to the defining moment, that would come out of Alfredo Almeida boot. The centre kept his nerve with the high expectations and slotted the kick, much to the delight of his team-mates, the staff and traveling support.

Star of the Match: Guilherme Vasconcelos (Portugal) – rock-solid, the centre was the best Portuguese unit, creating chances, assisting for the first try with an unexpected kick, and making himself a nuisance while defending his channel.

THE CHAMPIONS CRUISE INTO THE FINAL

Georgia’s national and age-grade sides have been long renowned for their strength and depth on the field, and this generation is no exception.

The U18 reigning champions produced another exceptional performance against Belgium, scored 14 tries on their way to securing another final berth. 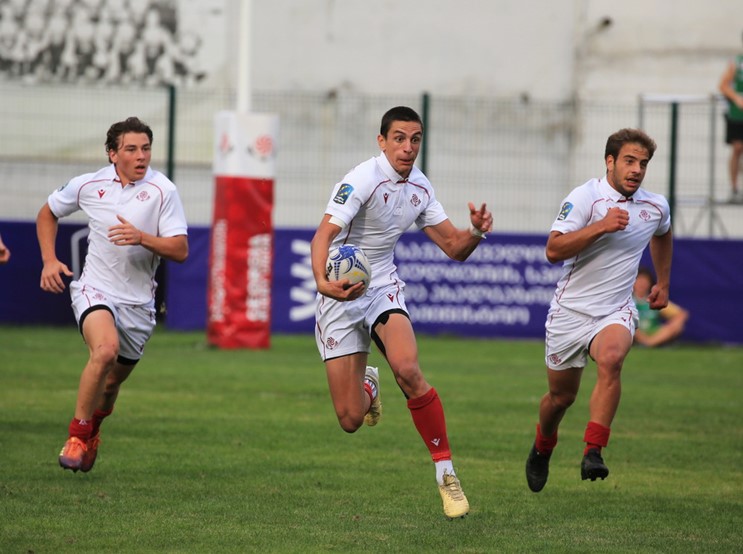 The Los Lelos have grown to a point that you can see that brilliancy doesn’t belong to a handful of players, but to an entire 26-man squad, that take seriously any match or challenge.

They are again in the Championship match, and they certainly want to add a fourth title to their silverware cabinet.

Star of the Match: Luka Khorbaladze (Georgia) – the fullback can really run, sidestep and apply a sense of wonder to every carry, creating three Georgian tries, and scored also two in this semifinal