U18 Championship Review - Round 1

Georgia, Belgium, Portugal and Spain will face-off Wednesday after winning their quarter-final contests and will certainly bring some memories of 2021 after posting victories.

The Netherlands came close to a win against their neighbours but were unable to convert their chances, and will join Romania, Czechia and Germany in the ranking matches after opening day defeats in this year’s U18 Championship.
Find out how every match went, and who were the standouts.

In the first match of the day, Portugal started well in their campaign to reach the Championship final, defeating Germany by 52-03. The Portuguese side started well and bagged two tries in the first 15 minutes, acquiring a comfortable score by half-time thanks to a well-rounded display of their forward pack.

Diogo Raposo, André Cunha, and Mateus Ferreira, Portugal’s backrow, put on a show that broke much of Deutschland’s attacking combination, with the trio being menaces in the breakdown completing four turnovers. 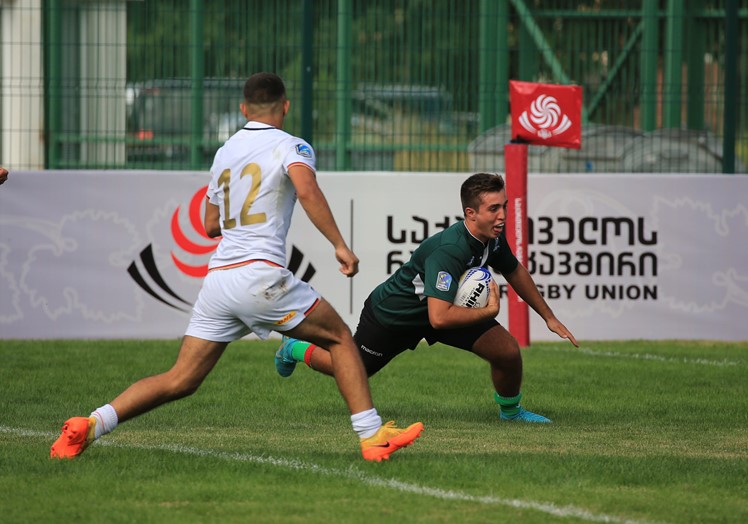 Germany tried to get inside the game, but the Portuguese showed their speed, agility, and impressive ball control, and, in the end, this was one of the key differences between the two sides.

Star of the Match: Pedro Correia (Portugal) – the first five-eight delivered a full hand of blows, assisting three Portuguese tries, creating a continuous problem for the opposition. Slotted six conversions out of eight.

It's @PortugalRugby who march on to the semi-finals after defeating @RugbyDeu in Tbilisi in the U18 Championship. pic.twitter.com/lvveJCmSHd

LOS LEONCITOS GO FOR THE RECORD

A record point-win for Spain U18s, who produced one of their best all-time performances in the U18 Championship, will face their Portuguese counterparts in a rendition of the 2021 semi-final.
102 points, 15 tries, and a hunger to keep going, the Spanish side were impressive in how they moved the ball around, slicing through the Romanian defence, thanks to the efforts of the centre pairing Yago Fernandez, Hugo Pichardie, and Manex Ariceta, the number-eight, producing some eye-catching offloads. 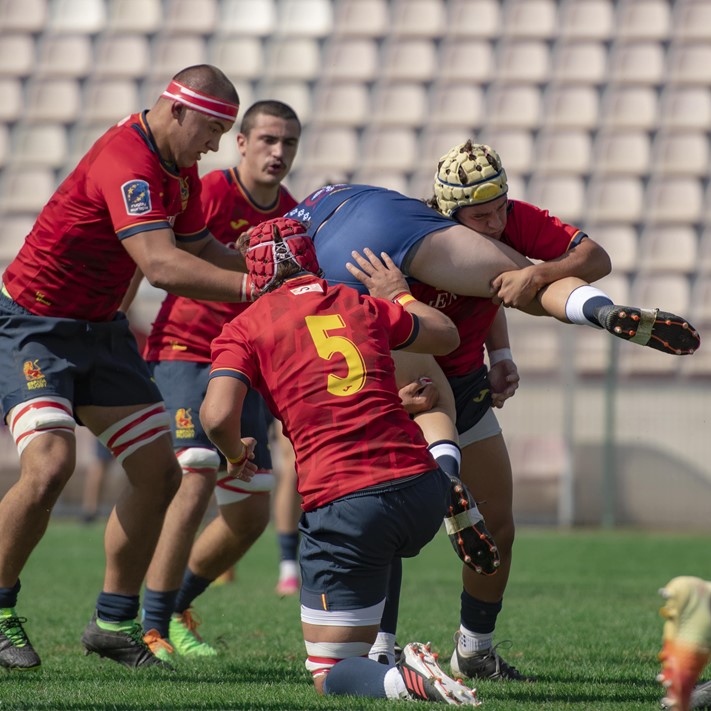 Romania's efforts to turn the game around were quickly shut down, as the young Leones didn’t take their foot off the gas. But the Iberian side wasn’t just impressive following their own set-piece, their own counterattack was also just as impressive.

Star of the Match: Manex Ariceta (Spain) – yes, he didn’t score any tries, but his presence and impact really helped Spain, as the backrow is a ferocious unit that can do the “complex stuff” with ease.

A century of points for @ferugby against Romania as they advance to the semi-finals in the U18 Championship. pic.twitter.com/4Ltk9yHX1P

For the third match of the U18 Championship, we were treated to a ‘Lowlands Derby’, as Belgium and Netherlands faced each other. After 70 minutes of a very tight duel, the Belgians edged pass their rivals.

The Dutch will be able to take plenty away from this game and enjoyed plenty of possession and opportunities, but the Belgians didn’t break, applying a smart and agile defensive effort that hindered the opposition's best chances. 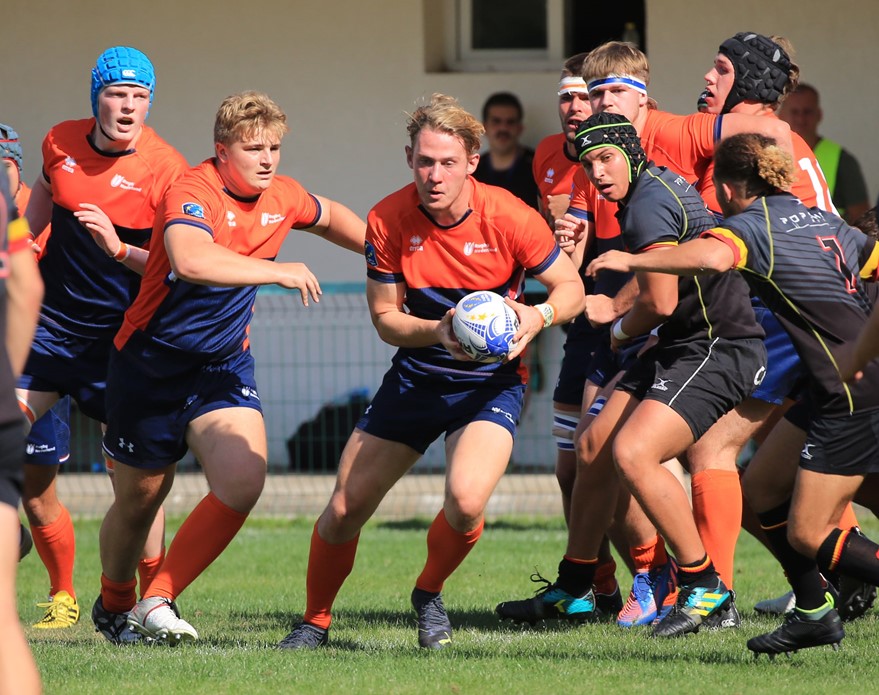 Lucas Michiels, Quentin Lefebvre, and Ilian Naimi were relentless in their tackling, helping Belgium to close down gaps or block any type of dangerous opposition linebreak, making sure that there was no path for a Dutch comeback in the 2nd half.

Star of the Match: Ilian Naimi (Belgium) It was an afternoon where it seemed impossible to pass through the Belgian tackler, who also dominated around the scrum, making life hard for the opposition to find any gaps.

A good contest sees @BelgianRugby come out on top against @RugbyNLD in Tbilisi to reach the semi-finals in the U18 Championship. pic.twitter.com/6QN7LJpBFb

THE CHAMPIONS CONTINUE THEIR UNBEATEN RUN

The hosts were the last of the Championship contenders to take the pitch, facing off a very valiant Czechia effort, before Los Lelos U18 started to pile up the pressure and turn up the game tempo, which would lead to a 76-0 score at full-time. 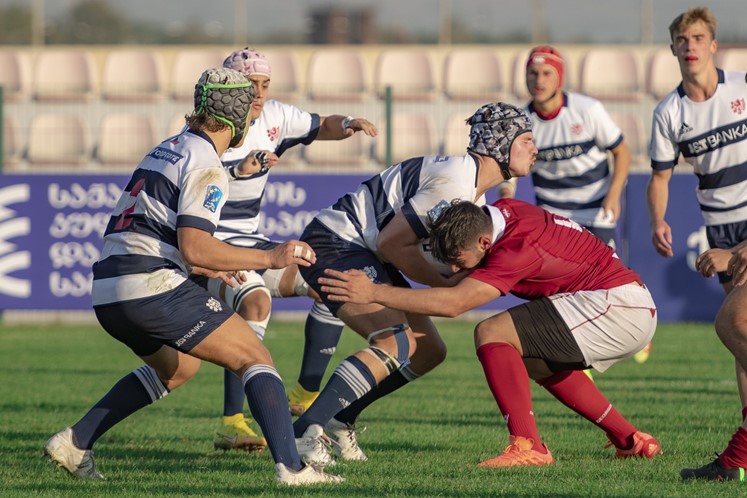 The Czechs showed some good composure, never backing down, fighting beyond their limits, forcing Georgia to step up and proving why they have been the unbeaten champions since 2018.
Luka Keshelava, Georgia's centre, was one of the units that really brought the match to a higher pace, alongside fullback Luka Khorbaladze, who scored a coast-to-coast try, alongside hattrick hero Tariel Burtikashvili.

A superb Georgian backline linked well with a rampaging forward pack, and the score grew in the second half.

Star of the Match: Luka Keshelava (Georgia) – absolutely stunning how the centre found his way through Czechia’s defense on numerous occasions and can be proud of his performance in front of an enthusiastic home support.

The current Champions march on! pic.twitter.com/NeISaqMx1r