Netherlands were playing in their first Rugby Europe Championship match

Georgia will head off to South Africa for two massive Tests with a spring in their step after they turned on the quality in the second half to see off a stubborn Netherlands outfit in Telavi on Saturday to be crowned Rugby Europe Championship winners once again.

They have been dominant in this tournament in the last few years, winning it every year now since 2018, and this was another good display to make it five wins from five in the 2021 version.

For the Netherlands, well they can take heart from the fact that they were right in the contest until half-time and they will want to take that positivity forward when they face Portugal in a fortnight.

Early on the Netherlands made things difficult for themselves when centre David Weersma, the captain, was yellow carded after taking a man out in the air.

The Georgians were quite inaccurate in the first few minutes while they had a man advantage, but in the 12th minute they managed to score an unconverted try through 18-year-old full-back Davit Niniashvili.

Back to 15 men, the Netherlands got themselves on the scoreboard in the 17th minute when scrum-half Amir Rademaker kicked a penalty.

In the 24th minute the home side were back in front when, whilst they had an advantage, a lovely cross field kick saw winger Akaki Tabutsadze go over for a well-worked try. Again it was unconverted.

Eight minutes before the break, Georgia No.8 Ilia Spanderashvili was yellow carded for a high fend while he was on the attack.

Three minutes later the Netherlands took advantage of having 15 men when they scored a brilliant try. Replacement Daily Limmen broke away and then, when he was tackled, popped up a lovely pass off the ground which the onrushing winger Jordy Hop took and went over for an unconverted effort.

That made things 10-8 and it was ‘game on’, but this Georgian side are made of stern stuff and with 14 men they scored a crucial third try just before half-time.

It came from scrum-half Vasil Lobzhanidze after he took a quick tap and although it was unconverted they were 15-8 up at the interval in front of a passionate crowd.

As often happened in earlier games in this tournament, the Georgian bench made a big impact while their general fitness gave them the upper hand in the second 40 minutes.

Soon after fellow substitute Giorgi Javakhia forced his way with another replacement, Giorgi Babunashvili, converting and it was 29-8 and just about ‘game over’ heading into the last quarter.

Things got tougher for the Netherlands in the 63rd minute when back-row Wolf van Dijk was yellow carded and Tabutsadze then went over for his second try of the day. Babunashvili converted and it was 36-8.

Niniashvili then scored with an excellent finish under the posts, his second try of the game, and Babunashvili converted for 43-8.

There was still a frantic last few minutes still to come though, the Netherlands showing that they are a team with great spirit when van Dijk sneaked in for a try in the 76thminute. Weersma converted.

Niniashvili then put the icing on the cake for Georgia with the clock in the red, a hat-trick score coming from this impressive young man to finish things off at 48-15. 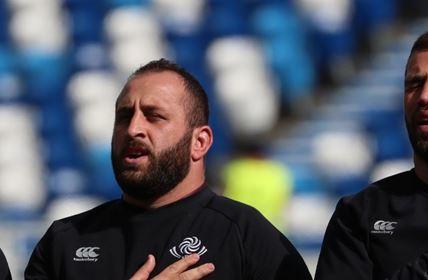 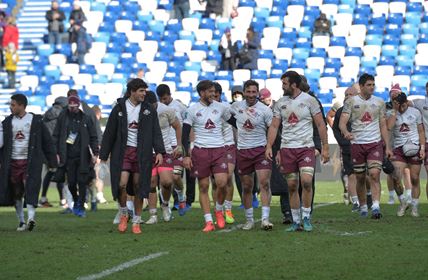