Romania completed their Rugby Europe Championship campaign for 2021 with a comprehensive win over the Netherlands on Saturday which means that they will finish second in the table.

Meanwhile, on Sunday, Spain put their previous frustrations behind them in this competition as they thumped shorthanded Russia.

That latter result means that if Spain can see off bottom side the Netherlands on December 18 then they could leapfrog Russia into fourth in the final standings.

In the Arc de Triumf Stadium in Bucharest, Romania took the lead against the Netherlands in the 10th minute when a lovely inside ball from centre Hinckley Vaovasa was run onto by winger Marius Simionescu who bagged a try. Full-back Ionel Milente converted. Winger Ionut Dumitru was next on the scoresheet when he made the most of a fumble in the visiting defence to dot down try number two in the 19th minute and Milente converted from the touchline.

In the 25th minute the visitors got themselves some points when a great break by strong-running winger Jordy Hop eventually saw second-row Koen Bloemen going over for a try converted by stand-off Mees Van Oord.

Their fourth try of the day arrive just two minutes later, Vaovasa going under the posts unopposed and Milente’s conversion making it 28-7.

Any hopes of a comeback by the Netherlands were snuffed out two minutes after the break when another massive lineout drive saw Cojocaru score his second try for Romania with Milente converting.

A converted try from Dumitru was next before he completed his hat-trick before the hour mark, Milente again adding the extras as the lead extended to 49-10.

Vasile Bardascu, the Romanian replacement hooker, had the final say late on which in-form Milente converted to complete things at 56-15. The following day at the Estadio Central UCM in Madrid, hooker Marco Pinto gave Spain an early lead with a try converted by stand-off Bautista Guemes.

Russia were dealt a massive blow when loosehead prop Valeriy Morozov was red carded in just the 10th minute.

Try number three came five minutes begore the interval, Pinto again powering over and when Guelmes converted it was 21-0 to the 15 men versus 14. 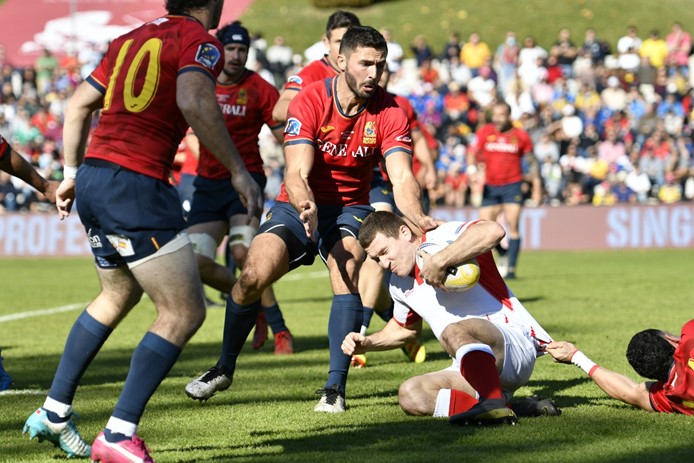 Russia did then get on the board through an unconverted try by scrum-half Konstantin Uzunov before Spain centre Fabien Perrin and Russia replacement back Viktor Kononov swapped converted tries to leave things at 35-12 with 15 minutes remaining.