Rugby Europe Super Cup - Round 6 Round Up

Winger JW Bell was pivotal in creating a series of the most dangerous plays, helping the Castilla y Léon Iberians finish with a fourth straight win in the competition. The Spanish side got into the lead early on but faced some problems to materialize their dominance with also a focused Brussels Devils defense contributing to reach half-time with a 3 point score gap.

Although this strategy worked well in the first half, it was difficult to maintain after the break as the Iberians started to connect their plays, moving the ball with greater ease as more attacking options showed up next to the ball handler, as seen in Lucas Santa Cruz try - a spree of sugar glazed offloads until the flanker dived for his second Super Cup 5 pointer. 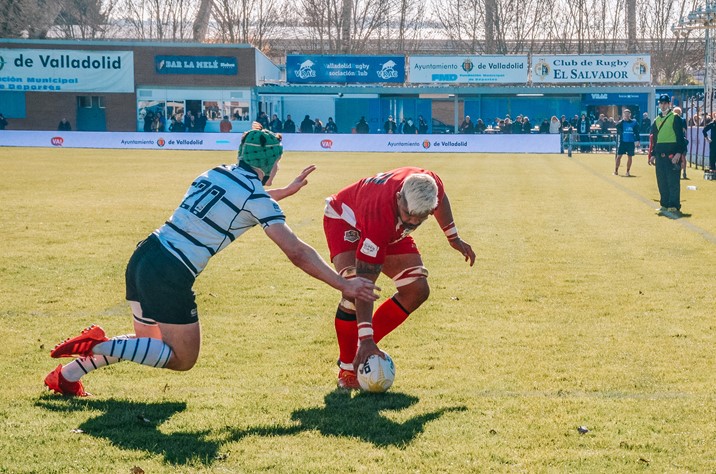 The Spanish pack rocked in the 2nd half, bulldozered the Belgians, dominating territory and setting up everything so their backline, powered by JW Bell, Tomas Jorge, and Pablo Rascón (the fly-half came on early due Tomás Carrió, the starting first five-eighth, picking up an injury), would take the advantage and run through the gaps to push for a try-fest that concluded the Iberians run in their pool.

For the Devils was a tough day in the office, as they made a serious effort to reply to their adversary’s attacking skills prowess, casting a defensive display that should make their fans proud, especially for Maximilien Hendrickx (a serious contender for the captain of the round), Floren Lenaertz or Viktor Pazgrat, and in the end they took some good lessons for what's to come in 2022.

⚔️ v 😈 | The @iberians_rugby are turning it on for their fans as John Bell gets his second of the day, they've scored four tries in just 🔟 minutes! pic.twitter.com/D6pHXI1T6N

15 MINUTES OF BLITZ FROM THE HEAT

From a tie to a try blitzing finish, Tel-Aviv Heat collected 5 points against Lokomotiv Penza during Saturday’s match, and are right on the track to qualify for the next Super Cup stage, as they now sit in second place with two more games to play in the Western pool. For those who only saw the end scoreboard, they might think the Israelis controlled the flow of the match from start to finish when, in reality, we had a very back and forth contest, that had Penza in the lead when the clock ticked the 60th minute. 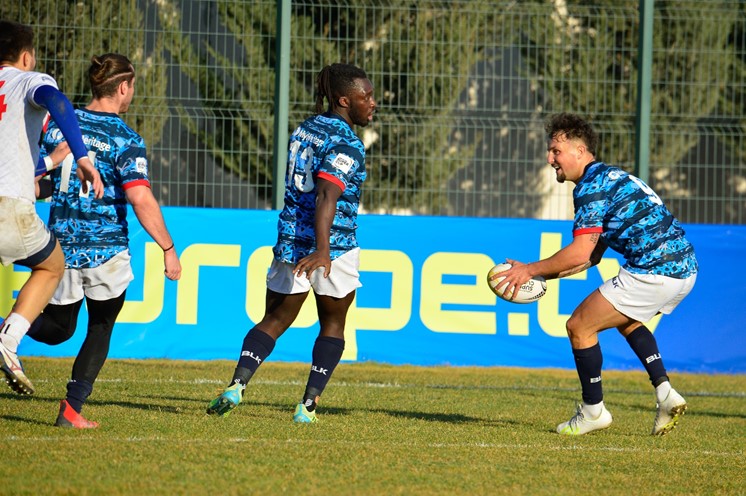 When it seemed the Russians were close to getting what could well have been a lethal decisive try, Tel-Aviv reacted and started to build up momentum, turning over a dangerous Penza play to a penalty, quickly setting a lineout next to the 5-meter line which was converted to a powerful sequence of phases finished by Nemani Buliruarua. From that point on, the Heat men raised their pace and hunger for more points, and suddenly, they moved past 14 points tie to a monster dominating display that dismantled Lokomotiv Penza’s defense which had proved so stong in the first 40, with the focus usually in the form of Sebastiaan Job, Gabriel Ibitoye, and, the man of the match, Renaldo Bothma.

Let us talk for a brief moment about the brute influence made by the number-eight, Bothma, firstly his direct impact in Heat’s second try: the Namibian International came out of the ruck, and, after seeing space in the back of the Russian team, placed a venomous kick chased down by Gabriel Ibitoye, with the centre capturing it (with help of a Penza individual mistake) and assisting Niall Saunders for the try. Bothma made also two turnovers, four tackle-breaks, at least two impact tackles, one line-break, and was a relentless thorn to Penza throughout the whole game. Tel-Aviv Heat is not going to back off from getting on to the semis, and the next couple of games will be intriguing to see

🔥 v 🚂 | Huge score! Counter-attacking rugby by @TelAvivHeat as they take the lead. pic.twitter.com/jB1VUjuLK6

We promised a brutal contest between the Black Lion and Enisei, and it was superbly delivered with ironclad tackles, roaring thumping mauls, "scientific" plays, and calculous strategic moves that pushed the scoreboard uncertainty until the clock ran out of time, with every player exhausted from a gasping challenge. 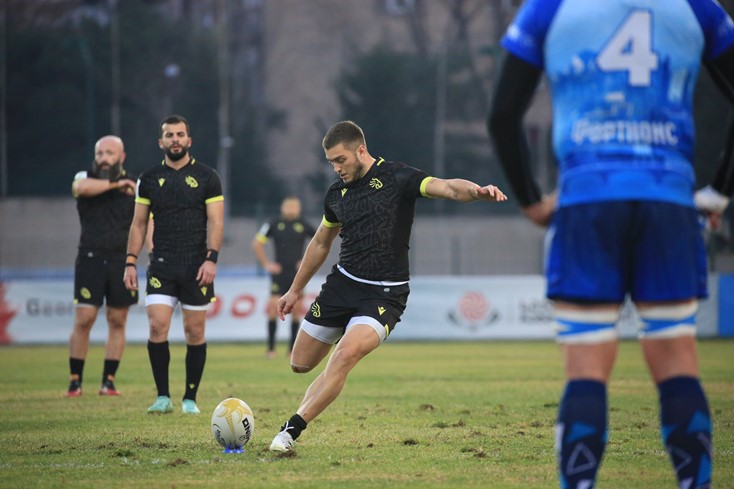 It made for exiting viewing, seeing the likes of Karel du Preez, Friedle Oliver, and Andrei Temnov taking their Black Lion counterparts Niko Aptsiauri, Sandro Mamamtavrishvili, and Luka Ivanishvili, with both back rows fighting to get some type of advantage not only in or around the ruck (the Georgians were globally better, snatching three turnovers) but also at the open plays, trying to give an extra edge to their team's movements.

The Russian champions found themselve sin-binned three times, and the Georgian side two, while also forcing fourteen penalties, while their foes only made ten. These mistakes broke some of the Enisei momentum, with the home side able to capitalize in the second-half and hold their lines with that tenacity. They were well led by Merab Sharikadze, as the Georgians bounced back after last week's loss, making it to the top of the table, while Enisei still has time to make the knockout stage and will be straight back into it as they take on the Tel-Aviv Heat on Wednesday.

🦁v🛡| TRY! Big score for @BlackLionRugby right on the stroke of half time in this crunch match in the Eastern Conference!

It's the wise head of Shalva Mamukashvili who gets it. pic.twitter.com/J0VHFz67TT

Top of the table, 6 wins, 29 points, 257 points scored (posing the best attack in the Rugby Europe Super Cup) and 73 points conceded, the Lusitanos struck another five star  display that wrapped a perfect run in the first edition of the Super Cup, with Delta being their final victim of the group stages.

Even without Nuno Sousa Guedes, Jerónimo Portela, Rafael Simões, or Tomás Appleton, the Portuguese side still was able to call up a dominating team that found their way to the try line for 10 times, sucking the air from Delta. 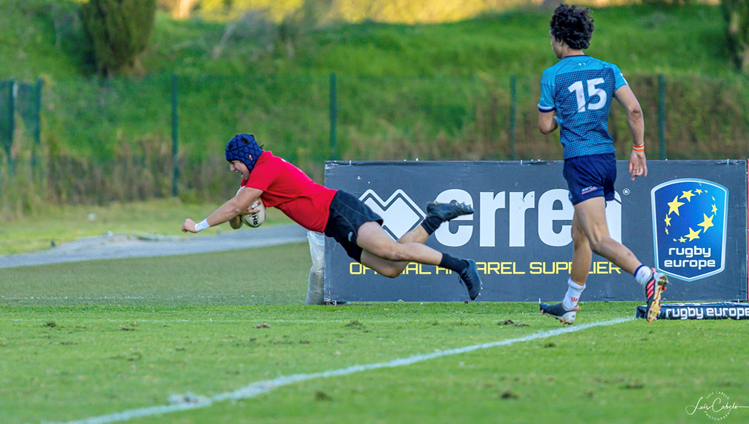 With both sides selecting a revamped 23 there were some impressive displays: João Vieira, open side centre, scored two tries, broke four times the advantage line and busted eight tacklers, following his superb U20 Rugby Europe Championship; Jorge Abecassis gave a master class on how to orchestrate things, throwing offloads and kicks, getting in the try assist board four times.

The Lusitanos have set up the benchmark in achieving 6 wins in 6 games, getting almost every attacking bonus point possible, and earning the status as the franchise to beat when they go into the knockout phase of the tournament.

⛵️ v🌷 | Wow! Not often you see two kicks to set up a try, but that's lovely work from the Lusitanos and it's another ⭐️⭐️⭐️⭐️⭐️ score! pic.twitter.com/1HlPunvXRL