THE GOAL: LUSITANOS RUNNING FOR A HOME SEMI-FINAL

After two good displays from the Portuguese national team where the nucleus of the Portuguese franchise contributed, the Lusitanos are back in full power, with their eyes set on the last goal for this year: earn the right to play a home Super Cup semi-final. After four victories in the previous rounds, Patrice Lagisquet’s men will once again look to come out firing against the Brussels Devils, fully knowing that the Belgian franchise need also the 4 points, as they are trailing behind the Castilla y Léon Iberians and Delta, with the Spanish holding firm in 2nd place.

So, in a game that everyone wants to not only win but also get what could be seen as a decicive edge to decisive to this Western pool, who has the best "armory" at the moment? It's safe to say the Lusitanos do possess a great flair and power, as seen in the Super Cup, and also those who put in an incredible passionate display against Japan, as it was the case for João Granate (scored one of the tries), Nuno Sousa Guedes (forced the Brave Blossoms to apply a more conservative approach), Rodrigo Marta or, the captain, Tomás Appleton, players who will be ready to go full speed in the last two Super Cup matches.

Nonetheless, the Brussels Devils won't look to names or caps, as they know their potential to bully in the scrum or to send the opposition backwards thanks to their kicking strategy, making use of a "tough as nails" mindset, led by their main stars such as Ryan Godsmark, Michael Abrahams or Hugues Bastin, who will make sure the Devils will fight for every meter, ruck, jump, or kick. Will the Lusitanos get an early check-in for the final stage? Or the Devils can go for the points?

THE TURNAROUND: CAN PENZA CREATE AN UPSET?

It's no lie that Los Lelos and the Black Lion are the top contenders for the Rugby Europe Championship and Super Cup gold - both competitions will be decided in 2022 -, but we can’t rule out another strong tussle against Lokomotiv Penza in their upcoming trip to Georgia. Why?

Penza were close to stopping a powerful Tel-Aviv Heat side in the 4th round, delivering an impressive first-half which got them in the lead, making points almost every time they got past the midfield line, be it by Sergey Yanushkin conversions or good attacking combos, vigorously marching through their maul to create a clear opportunity for the backs to quickly strike and get in the scoreboard.

Some of their best Youth stars are starting to rise, like back row Vladimir Geraskin or utility back Daniil Potikhanov, as well their best players are starting to play the right tune (commandeering lock James Down is a name to have your sights on); and their gameplan is finally coming together, mainly getting comfortable when they have to dominate the game pace or to withstand pressure inside their 22-meter line.

Will it be enough to break the refined Black Lion side, who likes to take their time to gnaw and break the opposition, amassing enough points to take the win? The only thing certain is that we will have the pleasure to watch a tremendous arm-wrestle, that can mean an undisputed first place or a last-call comeback.

THE AWAKENING: IBERIANS TO KEEP SPAIN IN A HIGH

What an excellent November for Spanish rugby, as the U20 National squad was crowned champions, while the national side defeated Russia for the Rugby Europe Championship, keeping their Rugby World Cup hopes intact and also being able to make the amazing Flying Fijians sweat, breathing in confidence for what reminds to play in the Super Cup, as they stand in 2nd place after two bonified wins in their tour in the Low Countries. 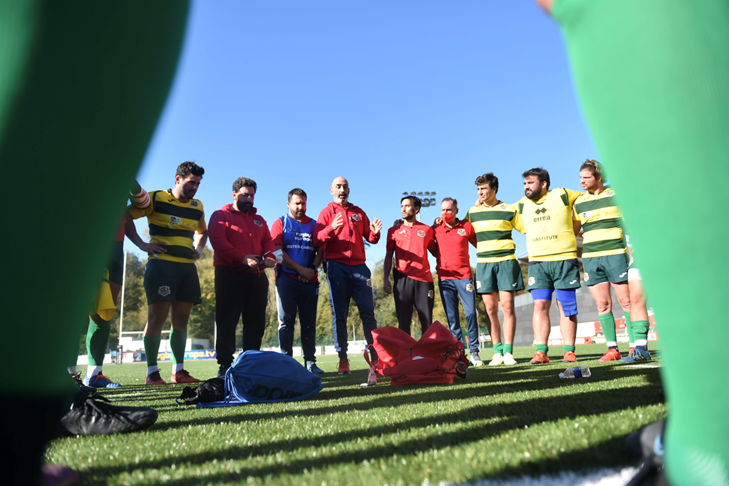 A turnaround after a not-so-great start was possible due to their growth as a solid unit, building their attack platform out of a monstrous pack, where their forwards set-piece (Nicolás Jurado is producing performances that would put him as a contender for the best prop between the Western Conference sides) works to great lengths, mixing superbly well with their backs, guided by flyhalf Sam Katz genius mind, explaining well their perfect run when they faced Brussels Devils and Delta in the two previous games.

Although expectations are placed on how Allard Jonkers Delta side can bite back, as a win in Spain would get them back on the trail to get back in second place, the odds are in favor for the Spanish, as at this time everything is seemingly landing in the right place, at the right time. Who has the edge? Will TH Campbell, Oliva Sialau, Dirk Danen be enough for the Dutch? Or the Spanish Internationals Alvar Gimeno, Pablo Miejimolle, John Bell, or Victor Sanchez will secure another 5 points to qualify for the finals?

Due to the newly imposed travel restrictions by the Local Authorities in Israel, because of the ongoing situation with the Covid-19 pandemic, the Russian team Enisei-STM are unable to enter into Israel for their game against Tel Aviv Heat this week with the game postponed, it will be rearranged in due course.