RE Super Cup Semi Finals - Ones to Watch

After what was a Men’s Rugby Europe Championship to remember, it is time to settle the Rugby Europe Super Cup, as four teams will battle for a place at the grand finale, to be held in May.

The four contenders consist of Portuguese Lusitanos, the Spanish Castilla y León Iberians, the Georgian Black Lion, and the Israeli Tel-Aviv-Heat, prompting the semi-finals to be two very close contests.

What can we expect? We have a look at some of the players who have been a key driving force for their teams so far in the competition.

The Portuguese franchise won every game during the pool stages, showcasing some of the best moves and plays that led to a dozen of superb tries. Amongst the players who shined brightly in the first phase of the competition, which saw the Lusitanos as the team with the most points and tries scored, was Rafael Simões.

A lock that can also play as a flanker or number-eight, Rafael Simões combines a flexible powerful physicality along with a wide skillset of moves, that go from a deadly offload (see his two try assists against the Brussels Devils) to an impressive sidestep, which makes him a true threat to the Heat.

🇵🇹 This is just a magical try.

With talent like this in the squad you wouldn't be surprised to see these guys lighting up the next @rugbyworldcup! pic.twitter.com/OB9oKzSxxp

The Israeli Tel-Aviv Heat are really a red-hot squad that can turn a boring game into a marvelous show, thanks to the likes of Sebastiaan Jobb, Renaldo Bothma, Xolisa Guma, and, of course, Gabriel Ibitoye, the English centre who will join the Bristol Bears, is a player that has turned games inside-out by a simple flick of his fingers. 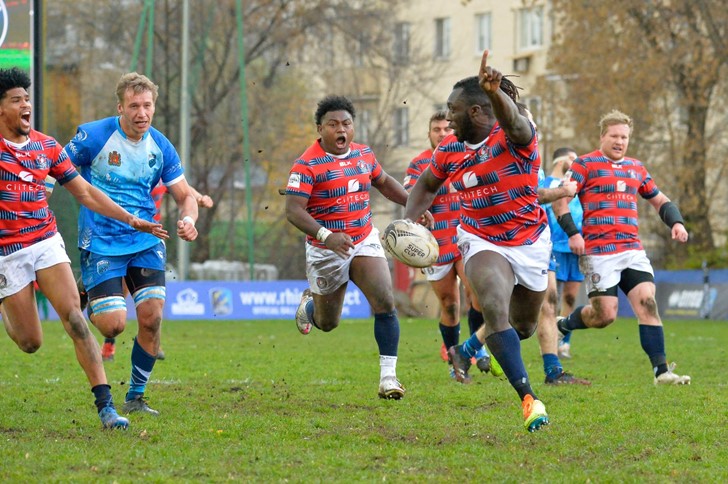 The subtle speed and quick acceleration are key attributes, and this is due to his prowess to throw an ingenious pass or offload, opening gaps all over the defense.

With Ibitoye speeding up plays in the field, it makes the Tel-Aviv Heat a formidable outfit, a complete menace from start to finish, he is the ultimate weapon which any team would wish for.

One of the most prolific try-scorers in the last three years at international level, Akaki Tabutsadze continues to impress, as his exhilarating speed and delicious stepping technique can cut defenses open like a hot knife through butter.

He isn’t that kind of player that just sits and waits for the ball in his corner, as he likes to search for areas to catch the opposition by surprise, appearing in the most unsuspecting places and going full throttle when the opportunity arises.

The security he shows when in the air is another decisive detail to understand how good Akaki Tabutsadze is, and how fundamental he can be when the Black Lion side wants to dominate the game.

Be ready and set for some ludicrous runs and breakthroughs by the Georgian winger, who is looking to keep his place as the try-scorer leader in the Super Cup.

🎯☠️| Served up on a plate and a deadly finish for @BlackLionRugby. pic.twitter.com/lv57boHR3p

Alvar Gimeno, one of the very finest Spanish players rocking the rugby pitch currently, and he will be a thorn in the side of the Black Lion contingent.

Gimeno is a center who understands the game at a higher level, reading wisely how the opposition move, searching for flaws and ways to explore them while doing some of the most brilliant off-the-ball work.

A silent prowler, the Los Leones international is always focused on his duties not only as a ball carrier or a first backline defender but also as a connector to build his team-best collective plays, which makes him instrumental if the Iberians of Spain want to dream big.

When he played for the Iberians in the pool stage, Gimeno was one of the cornerstones for the Spanish franchise missing only two tackles out of twenty-six, setting also two tries and a couple of line breaks that would help them secure the second spot at the Eastern table, and will certainly be one of the outstanding units in the upcoming semi-final.

Both Semi-Finals will be available to watch for free on rugbyeurope.tv this weekend.