Black Lion captain Merab Sharikadze was a happy man after leading his charges to the inaugural Rugby Europe Super Cup title at the weekend in Lisbon.

The Georgians edged out hosts Lusitanos in Lisbon 17-14 to take home the very impressive trophy to Tbilisi.

Centre Sharikadze said:  “This is a very important win for Black Lion and for Georgian rugby. I am happy and the team is happy because we were looking for this trophy since the start of the tournament.

“It was a tough game and finals are always tough right until the end. The key factor was physicality, that is what won us the game.

Levan Maisashvili, the Black Lion head coach, adds:  “It was a very hard game, but in the big moments our team showed control and they played well as a group for 80 minutes to get us over the line.

“It is a good feeling after a long season.”

Lusitanos head coach Patrice Lagisquet was not happy that his side were penalised so many times in the game by referee Peter Martin of Ireland and said:  “In the end we just needed to make some more passes to the outside and we would have had a chance to win this game, but the players can be proud of their efforts this season.”

Lusitanos captain Tomas Appleton said:  “We are disappointed with the result, but if I am honest we didn’t match up to them in some areas of the game and the breakdown was a big issue, we couldn’t adapt to what the referee was looking for.

“When you are struggling at the rucks and cannot get quick ball to the scrum-half then it is impossible to play.”

At the Jamor Stadium, it was the visitors who scored first in the 10th minute. 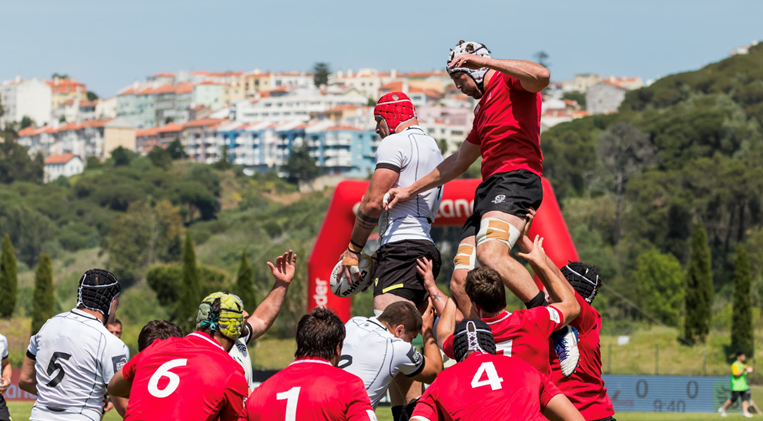 After a number of patient and well-constructed forward carries, young No.8 Luka Ivanishvili showed good footwork and awareness to go over for a try from close range. Stand-off Giorgi Babunashvili converted and they were 7-0 up.

The hosts got their first points on the board in the 18th minute and it all came thanks to a powerful run by No.8 Rafael Simoes. That break had the Black Lion defence scrambling and a neat pass from scrum-half Joao Belo set-up winger Manuel Cardoso Pinto to go over for the unconverted effort.

Nuno Sousa Guedes, the Lusitanos full-back, then kicked a penalty in the 27th minute and they were 8-7 ahead and that was the way it stayed until half-time.

When Sousa Guedes kicked his second penalty of the day in the 44th minute the Black Lion side knew they had to respond to 11 unanswered points.

When Georgian teams are up against it their packs always start to fire and they did that here leading to a Lusitanos yellow card.

Scrum-half Tengiz Peranidze then crept in from close range in the 53rd minute for his side’s second try. Babunashvili converted and they were 14-11 up.

On the hour mark a no arms tackle by Lusitanos replacement Manuel Lima saw a penalty awarded and Babunashvili made no mistake to extend their lead to 17-11.

The drama was not over by a long stretch though as, with 15 minutes to go, Black Lion replacement Giorgi Pertaia was yellow carded.

Sousa Guedes kicked the resultant penalty to make it 17-14, but despite the home side pushing until the end Black Lion held on to win, replacement Giorgi Begadze booting the ball out to spark celebrations from the Georgians.