We are a couple of days away from the Rugby Europe Super Cup 2022 semi-finals, and Black Lion, Lusitanos, Castilla y León Iberians, and Tel-Aviv Heat are all in the race to become book their places in the final.

After a well-deserved break after the six rounds of pool phase action, four teams are now focused on their weekend clashes to take a step closer to lifting the (very large) trophy!

Whoever it might be, the Super Cup final four contestants will need their best players to be tuned and ready to push their side towards the golden goal of the season, and we picked four stars who are deemed to drop the beat and set the rhythm.

Manuel Cardoso Pinto has been exceptional in this year’s edition with the winger/fullback standing at the top of a number of top stat charts: The Portuguese international has been lethal from the very first second, and it is all due to a combination of superb speed acceleration power (when he slightly tilts his chin up, it’s a done deal), a joyful sidestepping technique, with plenty of tricks in the back to evade the most determined of tacklers.

Manuel Cardoso Pinto’s stats are a dangerous statement for the visiting Heat, and they’ll be wary of that they shouldn’t take their eyes off him.

The 24-year-old openside flanker is one of the most influential cogs for the Georgian Super Cup champions, mostly due to his defensive and counter-strategy qualities, as our stats show: 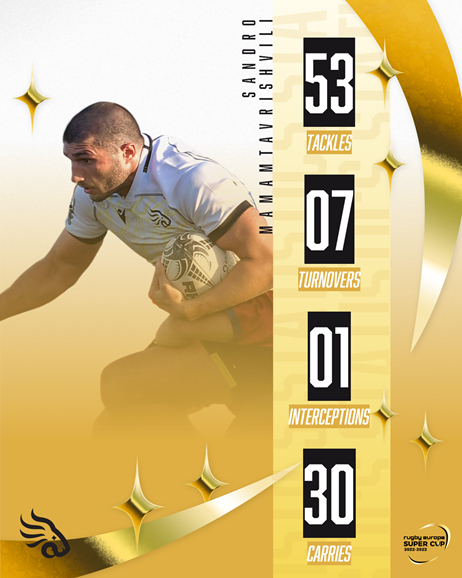 Sandro Mamamtavrishvili can be an insurmountable obstacle for any team, as he loves to be a “thorn” in his foes' attacking strategy, always on the hunt to lock not only a dominant tackle but also to quickly jump in the fray and fight for the ball.

If he is in his best form and combining well with Mikheil Gachechiladze and Luka Ivanishvili, then the Black Lion will be looking to retain the Rugby Europe Super Cup in their trophy cabinet once again.

Tel Aviv Heat’s Jordan Chait is the type of player that reads the game better than most and was instrumental in their most recent victory against Saracens and is prepared to perform under the intense pressure of any big encounter.

Let’s look at his stats: 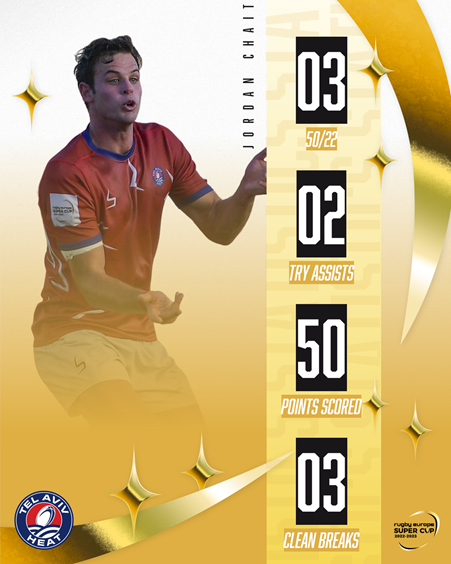 The South African nº10 is a swift unit that possesses the knowledge to outclass the opposition, be it by the rule of the boot, or by coordinating his teammates which can make the difference between victory or defeat.

Tufuga has the ability to be as sharp as the best winger but with added strength. The Iberians nº8, has been one of the best loose forwards in this 2022 edition. 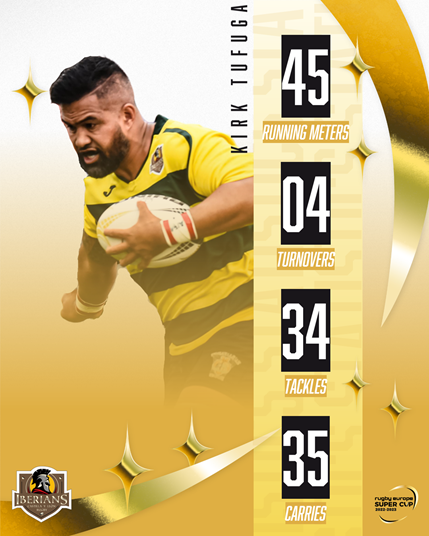 The Iberians continue to impress this season, and Kirk Tufuga has been one of the keys to the Spanish side's growth, especially in winning the advantage line or supplying his side’s defense with a ferocious tackler and jackler. A bulldozing threat that is going to put the Black Lion's forward pack to the test.

Well, there you have it, the Four Aces of the Rugby Europe Super Cup card deck, that will certainly take the spotlight in 2022 semifinals… but who will reach the grand final…?

You can watch both matches live on rugbyeurope.tv on Sunday.

RESC Round 6 - Stars of the Round
Super Cup Sunday sees four teams battle it out in the Semis
Round 5 - Stars of the RE Super Cup
An error occurred. Please try again later.