151 points over two brilliant Super Cup semi-finals, Lusitanos and Black Lion make it through to May 7 final

Lisbon will be the venue for the first ever Rugby Europe Super Cup final on May 7 between Portuguese side Lusitanos and Georgian outfit Black Lion. 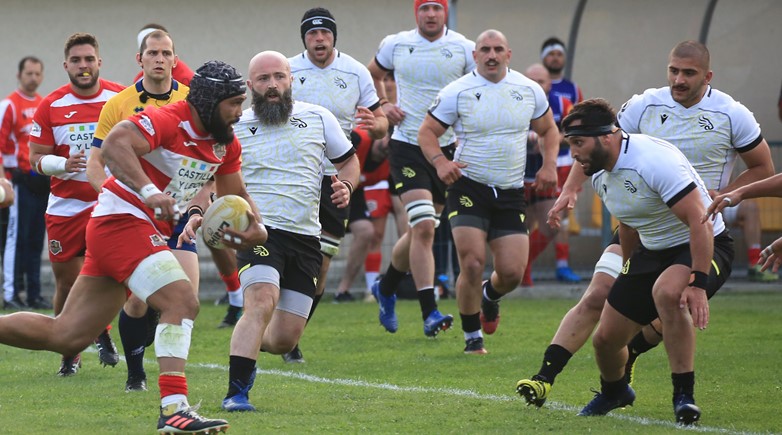 Over the weekend they were both pushed very hard in their last four ties, Lusitanos by Tel-Aviv Heat from Israel in the aforementioned stadium before coming through 42-26 on Saturday and Black Lion and Castilla Y Leon Iberians from Spain playing out a classic 24 hours later.

In the Avchala Rugby Stadium in Tbilisi, Black Lion eventually got the better of their visitors 43-40 after an end-to-end tie that had it all.

Going back to Saturday and Lusitanos started as the favourites, but when winger Jamba Ulenga scored an unconverted try for the Heat just before half-time they led 19-17 with 40 minutes to go.

What a score by Lomidze! Dazzling stuff by @BlackLionRugby. pic.twitter.com/CUjNJptF7C

They also led by a point at the hour mark before Lusitanos found an extra gear to come out on top by 16 points after a bit of a scare.

Patrice Lagisquet, the Lusitanos head coach, said:  “We have had a good campaign so far. Preparation for this game was not the easiest, but we got through to the final in the end and that is what matters.

“There were some new and young players involved in this game and the whole squad changed their mindset after the break and really got the team onto the front foot against a tough opponent.

“It is great to now have final coming to Lisbon and it is our goal now to win the final.”

Heat full-back Sebastiaan Jobb said:  “In the first half we really took the game to our opponents and we gave it everything.

“In the second half our line-out did not function too well and our defence let us down at times, but this has been the first season of the heat and I think we have laid down a good platform for the future.

“Everyone has worked so hard in recent months and I think that we can look to win the tournament next year, we have done the badge proud.”

Kevin Musikanth, the head coach of the Heat, said:  “We played very well in the first half, but if you don’t make your first up tackles then you will be punished and unfortunately that happened to us in the second half.

“In the end we were beaten by the better side on the day, they were a bit fitter than us. However, rugby at this level in Israel is still vert new and there are certainly good things to take going forwards.”

The following day everything was going on in Tbilisi with no side wanting to drop out of this competition at the last four stage.

The home side were leading 14-3 after the first quarter of the game, but Iberians fought back to just 21-20 behind seconds before the break.

Black Lion hooker Shalva Mamukashvili then scored an unconverted try with the clock in the red, but heading into the second half this one was very much ‘live’ at 26-21.

Just after the hour mark the hosts had extended their lead to 38-30 and seemed to have one foot in the final, but Iberians got a penalty on the board before Black Lion responded.

So, 43-33 with the clock heading into the red then only for Iberians to end on a high with seven points through a try by Franco Velarde - his second of the game - and a conversion by Samuel Katz from the touchline.